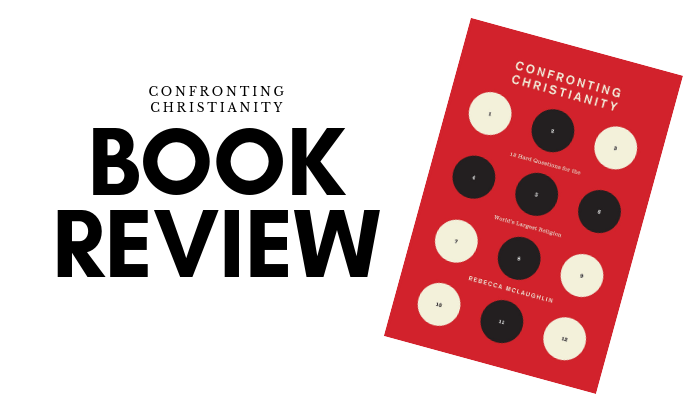 One of my Summer reading books this year was the book by Rebecca McLaughlin called “Confronting Christianity”. I had been eager to read this book given that a number of people I knew had recommended it, either face to face, via twitter or GoodReads.com.

Rebecca poses 12 questions that are commonly asked by non-Christians about the Christian faith and whilst most of the questions do pose a challenge for Christians, most in their answer actually reinforce why the Christian faith is undeniably true. There is everything you’d expect (in terms of the type of questions) from a book on apologetics: “Aren’t we better off without Religion” and “Doesn’t Religion cause violence” but she also tackles other questions such as “Doesn’t the Bible condone slavery?” and “Isn’t Christianity homophobic?” Rebecca uses the most recent research to give robust Biblical answers to these important questions. However, this isn’t a book of theory. Chapter 9, for example, is written from an autobiographic viewpoint and is as powerful as it is robust.

By far my favourite quote is this:

In a world where extremes of opinion seem to dominate the media landscape and people are quick to caricature each other, I was helpfully reminded that people aren’t the enemy. Didn’t Jesus exemplify this so well, and Paul teach us to “Speak the truth in love”? We should not hide away from speaking the truth, not should we be nervous about challenging worldviews that are different from ours. The difficulty is always to see beyond the person we are challenging, love them and graciously speak the truth.

I’d highly recommend this book to anyone who wants to know how Christianity answers some of the toughest questions that challenge it. It’s a fairly easy read, Rebecca’s style is engaging and relevant.