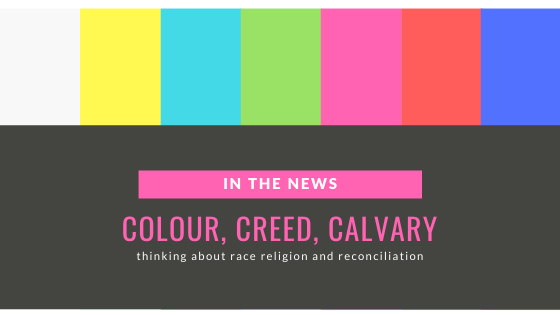 I’m walking into this debate very tentatively knowing that I don’t have the full picture or full understanding. However, when things happen in the world it’s good for us all to stop, take a breath, read our Bible and consider what God might be saying. Nothing could be truer than the time we are living in relation to the murder of George Floyd a the hands of four police offices, whilst in police custody.

I’m not going to address the incident or 100’s of similar incidents like it that go unnoticed from the lens of the camera. I can’t. I’ve seen the footage and read the reports but I wasn’t there and certainly don’t have enough information to make any meaningful comment about whether or not the officers knew what they were doing or whether this was an incident of racism. As we’ll see, biblical reconciliation does not depend upon a person having a complete understanding of the facts or issues of the day. True reconciliation consists of understanding God’s view on colour, creed and what was accomplished at Calvary by Jesus.

The following are three things that I can say, that need to be said, in order for true racial reconciliation to take place.

1) ALIGN OURSELVES TO WHAT GOD SAYS

Here is where we have to start: with what God says. I’ve listened to some great commentators over the last week or so and later on I’ll recommend two books that are a book primer on the issue but listen .. we need to understand that there is only one human race, not multiple races. As a person who has a “mixed-race” heritage (African-American Grandfather) I’m not half “this”, quarter “that”, quarter “this other thing”. I’m of the human race made in the image of God

Genesis 1:26–27 (ESV) — 26 Then God said, “Let us make man in our image, after our likeness. And let them have dominion over the fish of the sea and over the birds of the heavens and over the livestock and over all the earth and over every creeping thing that creeps on the earth.” 27 So God created man in his own image, in the image of God he created him; male and female he created them.

The Bible supports the idea – Jesus supports the idea – that Adam and Eve were our first biological parents and all humans are of the same family. Now skip forward a few chapters in Genesis to a time when this family started to behave pretty dysfunctionally. Actually, the family was outright disobedient and rebellious. So, God’s answer to this was to divide the nations to stop their rebellious collaboration against Him (Gen. 11:1-9). This was made along national lines not according to ethnicity.

From that moment onwards the writes of the Bible used extraordinary examples to reinforce the “one race of God”, and set it apart from whatever the cultural notion of the day was. For example, Abraham was from modern-day Iran, two of his descendants (Judah and Simeon) married Canaanites, while their brother Joseph married an Egyptian. Moses’ wife was a black African woman from Cush (Num. 12), Rahab was Canaanite (Josh. 2–6), Ruth was from Bethlehem which is currently in The West Bank. A servant of king Zedekiah called Ebed-melech, who saved Jeremiah was Ethiopian.

The great climax to God’s story is, of course, played out in heaven where we see from Revelation 7 that there are every tribe, nation and tongue represented before the throne of God together worshipping Him.

Revelation 7:9–10 (ESV) — 9 After this I looked, and behold, a great multitude that no one could number, from every nation, from all tribes and peoples and languages, standing before the throne and before the Lamb, clothed in white robes, with palm branches in their hands, 10 and crying out with a loud voice, “Salvation belongs to our God who sits on the throne, and to the Lamb!”

Interesting that Jesus taught us to pray:

which, in this context presumably means that the biblical model for all people to be in unison as we praise and serve God – whatever our ethnicity.

So, here’s the point … we derive our understanding of race, ethnicity and identity by what the Bible says and, as Christians, this is rooted in the person and work of Jesus. (Eph. 2:11-19; 2 Cor. 5:17). This the beauty of Calvary:

And so before we go on we must consider where this is the identity we have! In one of my recent sermons, I talked about “considering ourselves dead to sin and alive to God” (Romans 6:11). We must become all that we are in the process of becoming and we do this as we preach the gospel to ourselves in realising that Jesus has united us in Him.

So in light of what God says about race, let’s think about how this affects my own attitudes. Bryan Loritts has some interesting things to say but probably stops short of what needs to be said. Here’s his 5-minute video:

I’m assuming you just watched it. It’s ok. His basic point seems to be that we need to hear each other’s cultural perspective in order to see the whole. I couldn’t agree more. However, this means that we have to go beyond simply hearing the other viewpoint but really making a habit out of practising preference for others and going together to God in faith. I liked his story of the Head of Donald Trumps Campaign asking for anointing and prayer from the “mainly African American elder board”. This showed that the church was practising preference for others – particularly those that each party might disagree with politically. Practising showing preference to others – and particularly those that are distinctly different from us (in all ways) demonstrates faith by saying we are getting ready for the Kingdom that is to come.

Philippians 2:3 (ESV) — 3 Do nothing from selfish ambition or conceit, but in humility count others more significant than yourselves.

Dr Tony Evans, pastor of Oak Cliff Bible Fellowship in Dallas, Texas and author of “Oneness Embraced”  released this insightful video that is well worth a watch:

Columnist Jack White once observed, “The most insidious racism is among those who don’t think they harbour any.” His point is that those people (regardless of ethnicity BTW) who claim “I’m not racist” and leave their stereotypes unexamined will inevitably carry them forever, perhaps even pass them on to others. We would add that failing to come to terms with our assumptions about race and ethnicity will keep us blind to important aspects of biblical teaching.

Again, Dr Tony Evans on “Pastors Perspective” opens some of this up for us in a way that I can’t do so this is a must watch.:

The honest truth is that this is SO much that could be said on this subject but until sin is repented of and Christ embraced we are going to continue to be a people divided. May God help us.

I mentioned at the beginning of this post two books that I think are good reading. The first is by The Color of Law: A Forgotten History of How Our Government Segregated America by Richard Rothstein. Amazon describes it:

Widely heralded as a “masterful” (Washington Post) and “essential” (Slate) history of the modern American metropolis, Richard Rothstein’s The Color of Law offers “the most forceful argument ever published on how federal, state, and local governments gave rise to and reinforced neighborhood segregation” (William Julius Wilson). Exploding the myth of de facto segregation arising from private prejudice or the unintended consequences of economic forces, Rothstein describes how the American government systematically imposed residential segregation: with undisguised racial zoning; public housing that purposefully segregated previously mixed communities; subsidies for builders to create whites-only suburbs; tax exemptions for institutions that enforced segregation; and support for violent resistance to African Americans in white neighborhoods. A groundbreaking, “virtually indispensable” study that has already transformed our understanding of twentieth-century urban history (Chicago Daily Observer), The Color of Law forces us to face the obligation to remedy our unconstitutional past.

The second book is by Christian author Jemar Tisby called “The Color of Compromise” and specifically addresses the church. Here’s what Amazon says:

An acclaimed, timely narrative of how people of faith have historically–up to the present day–worked against racial justice. And a call for urgent action by all Christians today in response.

The Color of Compromise is both enlightening and compelling, telling a history we either ignore or just don’t know. Equal parts painful and inspirational, it details how the American church has helped create and maintain racist ideas and practices. You will be guided in thinking through concrete solutions for improved race relations and a racially inclusive church