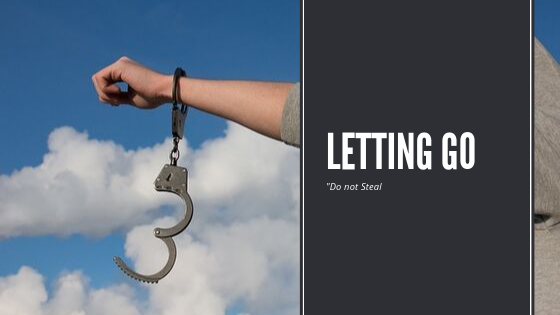 The thief comes only to steal and kill and destroy. I came that they may have life and have it abundantly.

Last Sunday we explored the commandment “Do not Steal” as given in Exodus 20:15. To get the sermon entitled “The Big Ten: Letting Go” click on this link.

As we’ve been going through these commandments we’ve been exploring the sin behind the sin: the idea that these things are not only commandments from God to keep – “do not steal” – but they also uncover the motivations and attitudes that lead to that specific sin. For example, when we looked at the command “Do not Murder”, from Exodus 20:13, we said that all humans have been made in the image of Jesus Christ and therefore each of us has some intrinsic worth and value because of it. This should lead us to not only protect human life from conception to the grave but it also now motivates towards the positive – aggressive compassion. If we value human life because it’s made in the image of Jesus, we should do everything we can to be merciful and compassionate to our neighbours, friends, colleagues, peers and family.

So this was originally played out in the Garden of Eden when Satan tempted Eve to take (steal) the fruit. We see the pattern in the Bible that Satan is the greatest taker of what does not belong to him. On the other hand, Jesus Christ is the giver of all that He owns. Jesus said:

The thief comes only to steal and kill and destroy. I came that they may have life and have it abundantly. (John 10:10)

The thief that Jesus is talking about in this context was the religious leaders who sought to get people to behave outwardly but ignored the inward issues. You could say that they only focussed on the sin, not the sin behind the sin. Jesus continually rebuked them for this because mere adherence to the law doesn’t bring life, it brings death. So mere outward obedience robs us of the desires and motivations of a relationship. Whereas Jesus says that He came to bring life. To bring freedom, knowing that God’s graces and already abundantly been given to you and there’s nothing else you need apart from this.

You see, Jesus gives me security, so, my security isn’t resting on money or things. I have freedom because I’m no longer in the business of trying to gain acceptance and honour from God or others – I’m secure. I no longer have to push my way to the front of the crowd or climb the ladder to get to the top of the tree (Luke 19:1-10). Out of the freedom that God’s generosity provides comes an impulse towards generosity rather than accumulation