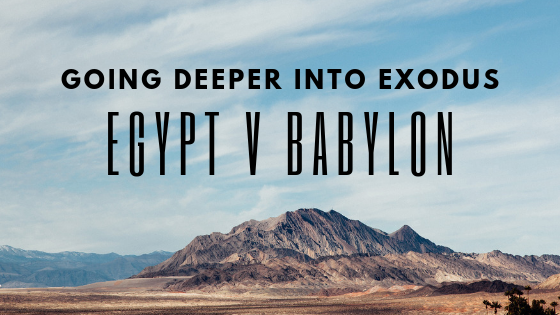 I’ll open the discussion with these verses from Isaiah 43:16–17 where Isaiah (writing to exiles) is writing about Israel’s deliverance from Babylon – yet wanting his readers to understand that this release as another Exodus:

This is what the LORD says—
he who made a way through the sea,
a path through the mighty waters,
who drew out the chariots and horses,
the army and reinforcements together,
and they lay there, never to rise again,
extinguished, snuffed out like a wick.

The context of this passage is the same as our passage in Exodus 14 – Israel’s unfaithfulness and God’s mercy. Notice that in this passage above God promises that He will bring Israel out of Babylon despite the fact that they have forgotten how God is (note the major theme of Exodus is about reminding Israel who God is). God is, in effect, reminding the Israelites that He has done this kind of thing before and He will certainly do it again. The departure from Babylon will be another Exodus.

Of course, to most readers of the Bible, the parallels that exist between Israel’s enslavement in Egypt and their exile in Babylon are pretty straightforward. Here’s the summary:

Ok. Good so far, but let’s delve a little deeper.

There is a theological connection between Genesis 1 and the creation story, and these two events. Recall that in both the exodus and the return from exile God displays His power in a mighty way, resembling what he had previously done in creation. It’s too much to explore all of it here so I’ll give you an example from Isaiah 51:9–10:

Awake, awake! Clothe yourself with strength,
O arm of the LORD;
awake, as in days gone by,
as in generations of old.
Was it not you who cut Rahab to pieces,
who pierced that monster through?
Was it not you who dried up the sea,
the waters of the great deep,
who made a road in the depths of the sea
so that the redeemed might cross over?

Notice a couple of things: Isaiah is calling us to remember the works of God “in days gone by,” and “in generations of old.” The way those acts are described is most certainly a reference to Exodus 14 when God parted the Red Sea. The interesting twist actually appears in his reference to “Rahab” who He cut into pieces. Huh! Now that’s not something we read about in Joshua where the story of Rahab appears. It’s also not remembered in Hebrews 11 where Rahab is illustrated as a woman of remarkable faith.

So who is this “Rahab”? Well, the Near East is filled with stories about who the world came into existence. One of those stories depicts a world in conflict and the creation as the subduing of the sea creature called “Rahab”. As the story goes, it was necessary to tame this monster so that the world could be inhabited. Whichever “god” won the struggle was elevated to the highest order of “god” over other “gods”. In other words, Isaiah is saying that God won this “struggle” against Rahab and by doing so has tamed the chaotic waters.

So, we now see a little more clearly the connection between the cutting into pieces of Rahab and the dividing of the waters of the Red Sea i.e. the power God displayed over the Red Sea in Exodus is another slaying of Rahab.

Isaiah 30:7 and Psalm 87:4 as two further examples of how the writers make a connection between Egypt and Babylon.

Now think about another angle. Think about Pharaoh as Rahab. Isn’t Pharaoh seen as a chaotic figure who is bent on lifting himself up and encroaching on God’s created order? Wasn’t it Pharoah who was preventing God’s creation mandate to humankind to be “fruitful and multiply”. Wasn’t it also Pharoah who was preventing God’s promise to Abraham from taking place? Wasn’t that the purpose of the plagues? To reverse creation back into chaos? These punishments are the reintroduction of the watery chaos found in Genesis 1:2 and the death of the Egyptian army in the Red Sea is the final climatic end to this struggle between the true God and the monster Rahab/Pharoah, where, once again, the waters are tamed.

What happens, in the end, to the Egyptian army (and more importantly) to Pharaoh? He is swallowed by the sea. What happens at the end of the story … I mean … the real end of the story? In Revelation 18:21 we’re told that Babylon “is thrown into the sea.

Curiously, in the new world, there is no sea. (Rev 21:1). There is never the opportunity again, for chaos to reign.

2 Comments On “Going Deeper in Exodus: Egypt vs Babylon”