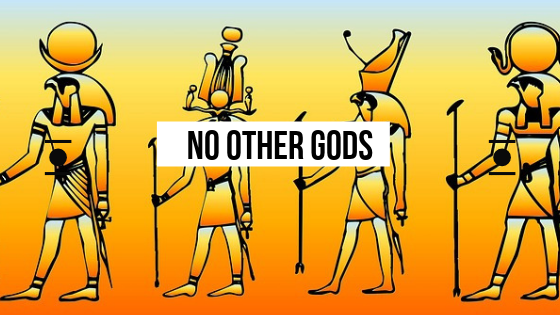 In our studies in the book of Exodus, we have discovered that God is at war with the gods of Egypt, but who exactly are these gods and why are so many pages of Scripture given to talk about these “other gods”?

The gods of Egypt

There has been a lot written about the gods that the Egyptians worshipped and how the God of the Bible, seeking to release the Hebrews of slavery, proved that He alone is the God to be worshipped. The Egyptians deified a great many things: the river Nile, bulls, frogs, thunder, the sky etc. They believed that since certain things were valuable to life there must be some kind of power in the background that orchestrates it. For example, they saw the power of the life-giving Nile river, how everything around it was green and good (particularly when contrasted with the desert) and as the seasons came and went – and prosperity with it – they concluded that they must be a “person” directing and empowering the movement and flow of the Nile.

So, one by one, God comes against these things that the Egyptians attributed to a, or many gods. But are there actually “gods” behind these things?

Well, when we look outside of the book of Exodus we see that the entire Bible is literally full of references to “other gods”. Verses like:

One of the most extraordinary verses is actually found in Deuteronomy 4:19 where God forbids the Israelites from worshipping “the sun, the moon and the stars, all the host of heaven . . . [which] Yahweh your God has allotted to all the peoples everywhere under heaven.” In other words, they were told not to worship other gods, not because those gods did not exist, but because they were supposed to rule other peoples, not God’s people.

Turning to the New Testament we see that there is, again, an acknowledgement that other gods do actually exist and they are not just personifications of natural things. Paul, writing to the church in Corinth explained:

In their case the god of this world has blinded the minds of the unbelievers, to keep them from seeing the light of the gospel of the glory of Christ, who is the image of God. (2 Corinthians 4:4)

Paul acknowledges that there is a REAL “personality” with REAL power that is REALLY invested in the life of this world. Further, Paul writes about the rulers, the authorities, the cosmic powers and the spiritual forces of evil (Ephesians 6:12) whom he has  “disarmed” and put them to open shame, by triumphing over them” (Colossians 2:15).

So it’s clear, just from a brief examination of Scripture that there are actual forces that power certain things that pertain to life here in this world. They are not personifications of natural events or occurrences but they rule, having cosmic power to wield evil.

Why is it important to understand “other gods”?

Jesus said that Satan, the chief “other god”, is the “father of lies” (John 8:44). Paul says that he can actually appear like an angel of light (2 Corinthians 11:14–15). Additionally, Paul says, his servants also disguise themselves as “servants of righteousness”.  This has a number of implications for us each and every day:

What in the world is going on?

Theologian N. T. Wright helps us to understand why this cosmos seems to be at war, both spiritually and politically. There is a world, unseen, that is hostile to God and His people. It is no surprise that history is full of conflict, because its driving animus is conflict between supernatural forces, which are visibly represented by both religious and political communities. In other words, the reason we see so much conflict around the world is because of what powers conflict. When people say that religion is the root cause of war I believe it! Why? Because wars between nations were really only the shadowy surface of the deeper and more fundamental combat between spiritual powers. Daniel 10 suggests that these powers and principalities that Paul writes about in Ephesians 6 are located to geographical areas, responsible for empowering Kings and nations. If that is true it’s hard to suggest any other reason for worldwide conflict. For a really interesting read, I’d suggest Clinton Arnold’s book ‘Power and Magic: The Concept of Power in Ephesians” as well as Samuel Huntington’s classic “Clash of Civilizations”.

In Paul’s second letter to the Corinthians, he is making the point that since Satan and his followers are able to disguise themselves as something that they are not, so too can false teachers and false apostles. He writes:

such men are false apostles, deceitful workmen, disguising themselves as apostles of Christ. And no wonder, for even Satan disguises himself as an angel of light. 15 So it is no surprise if his servants, also, disguise themselves as servants of righteousness. (2 Corinthians 11:13-14)

Paul is making the point that we need to be careful about who our Biblical teachers are, and what we believe about God, because the source of the teaching may actually be false. Paul wrote to Timothy and said:

For the time is coming when people will not endure sound teaching, but having itching ears they will accumulate for themselves teachers to suit their own passions, and will turn away from listening to the truth and wander off into myths. 2 Timothy 4:3–4

This absolutely typifies the current spiritual climate of churches up and down the country. Notice what Paul says:

Peter says that “there will be false teachers among you.” (2 Peter 2:1). Peter isn’t writing about what is taking place “out there”, apart from the church. Notice those words “among you”. He is writing about the people in the local church, members of a local congregation. Satan is the counterfeiter. . . . He has a false gospel (Galatians 1:6-9), preached by false ministers (2 Corinthians 11:13-12), producing false Christians (2 Corinthians 11:26). . . . Satan plants his counterfeits wherever God plants true believers (Matthew 13:38).

We must be careful and we must not be ignorant. There are powers behind false teaching. The authority of the Bible must take centre stage.

Where is our power from?

Perhaps the biggest implication for us is re regard to our own sanctification. This is exactly how Paul frames “other gods” in Ephesians 6:10-20. The summary: the Christian’s opponents are superhuman spiritual forces and so mere human resources will not work. Be filled with the Spirit (Ephesians 5:18) – rely on the power and protection of God, embracing the Word of God through specific obedience and fervent and focused prayer.

The reality is that many Christians rely too much on themselves and not enough on the grace of God. In this famous passage, Paul is clearly calling believers to stand firm, not on their own ability or effort, but in the grace of God.