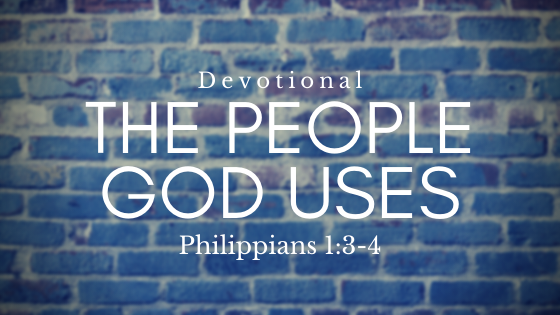 Philippians 1:3-4 – I thank my God in all my remembrance of you, always in every prayer of mine for you all making my prayer with joy,

The church in Phillipi wasn’t founded by former war heroes or even an apostle. In fact, the people who started the church were pretty ordinary: a Turkish businesswoman, a Greek Slave girl, and a prison guard.

The businesswoman was a late called Lydia who owned a company called Purple Inc. (Ok, I made that bit up). But she did sell purple clothes to the rich and famous. She was from a town called Thyatira which is in modern-day Turkey. One day she gathered with a group of women to hear the Scriptures explained by Paul. God used Lydia in a tremendous way because she asked some friends to join her in seeking God.

This little girl stands in absolute contrast to Lydia. Where Lydia is Asian, this girl is Greek. Where Lydia is in control, this girl is impoverished, enslaved, and exploited. While Paul and Lydia meet in the context of a formal, orderly group meeting, Paul and the slave girl meet as she follows the missionaries around, screaming her head off. She is disruptive. “These men are servants of the most high God and show you the way of salvation,” she said. Paul doesn’t turn around and say, “I’m doing a seminar Saturday on ‘Crazy.’ I would like for you to come because I think you have crazy in you.” What happens is, in an act of Holy Spirit power, he rebukes and exorcises the spirit that rules her and enslaves her on the inside. The girls becomes an evangelist and brings dozens to the Lord.

The prison guard was a tough guy. He was told to keep Paul and his companions safe but instead, he tortures them. He put them in stocks where their hands and feet where he forced the body into all shapes, locking limbs and joints in place to the point of making the entire body cramp. This jailer is very good at his job, and he probably likes it more than he should! As Paul and Silas started praying for him there was a great earthquake so that the foundations of the prison were shaken.

I’ve heard people with voices like that: when they sing everything starts moving.

This isn’t because they can’t sing it’s because God has heard them. The prison guard turned to the Lord.

A Turkish businesswoman, a slave girl and a prison guard. Probably not exactly your dream church-planting team yet God uses the ordinary people to do extraordinary things.

So by the time Paul writes to them it’s been roughly 1-15 years since he first visited. So it’s fitting that he thanks God for them. But now, he’s no longer writing to the businesswoman, slave girl prison guard. In that time they have changed and grown.

I wonder how old the slave girl is now. What sort of young woman has she grown up to be?  I wonder if she has found a good man. Does she have children?

What about Lydia? What has Lydia done for the good of the gospel with all her wealth?

What about the jailer—has he softened, or is he still rough around the edges?

What has God down with you? Looking back can you say that you’ve been used in extraordinary by God and now, through that process, God has changed you?