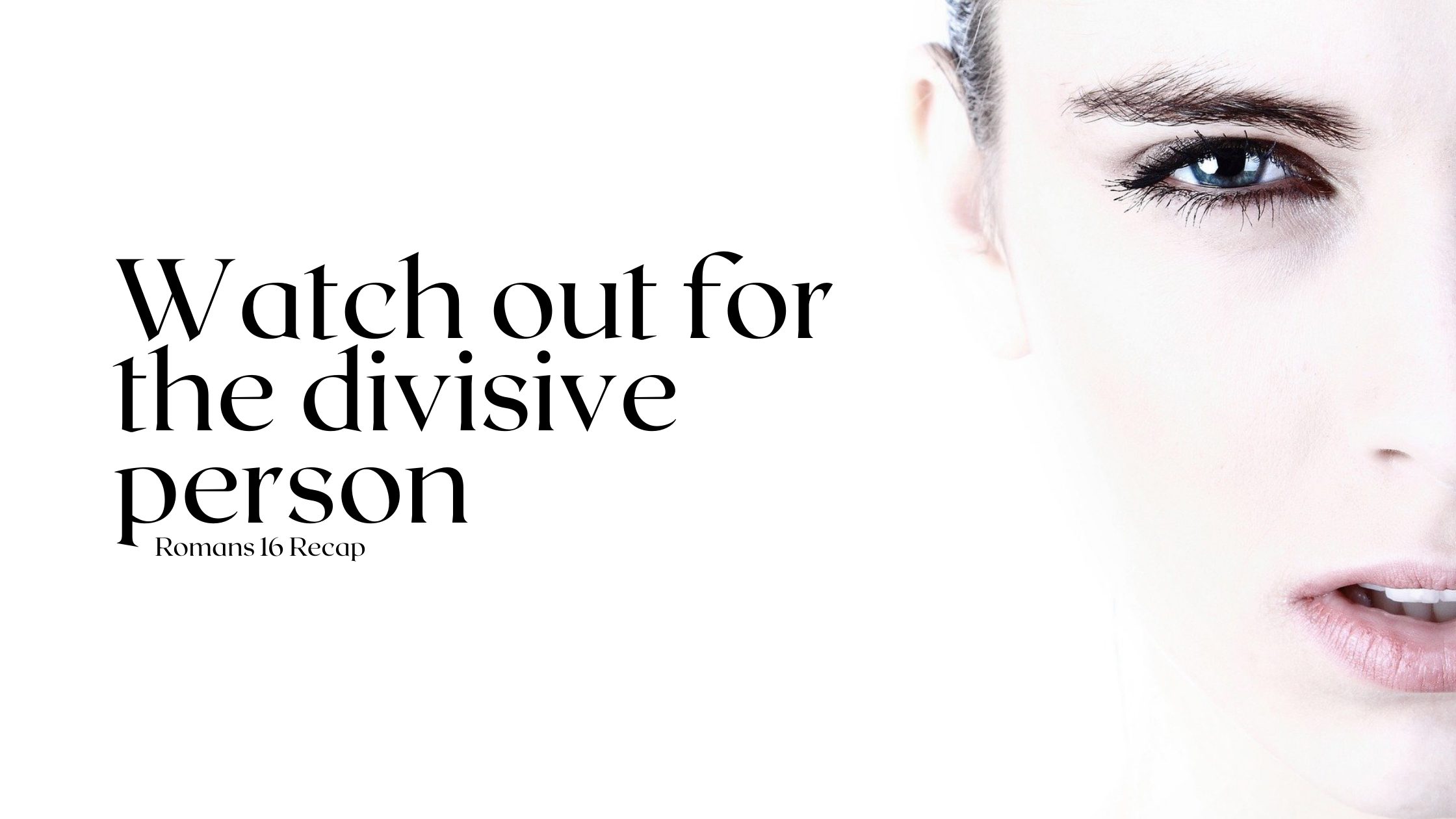 Last week’s sermon (here) looked at the difficult subject of Christian division. The text was Romans 16:17-20:

17 I appeal to you, brothers, to watch out for those who cause divisions and create obstacles contrary to the doctrine that you have been taught; avoid them. 18 For such persons do not serve our Lord Christ, but their own appetites, and by smooth talk and flattery they deceive the hearts of the naive. 19 For your obedience is known to all, so that I rejoice over you, but I want you to be wise as to what is good and innocent as to what is evil. 20 The God of peace will soon crush Satan under your feet.

The basic idea that Paul wants to teach is that we should watch out for those kinds of people who make divisions, and then divide from them. We saw how this is a frequent instruction in the New Testament:

2 John 10:  If anyone comes to you and does not bring this teaching, do not receive him into your house or give him any greeting,

2 Thessalonians 3:14: If anyone does not obey what we say in this letter, take note of that person, and have nothing to do with him, that he may be ashamed.

The Old Testament uses language that we a probably even less comfortable with, where Solomon says that there are certain things that God hates:

Proverbs 6:19 … one who sows discord among brothers.

The really sad thing is that quite often, these sowers of discord were once counted as friends and Solomon says that  “calamity will come upon him suddenly; in a moment he will be broken beyond healing” (Proverbs 6:15). Since it is “good and pleasant” when “brothers dwell in unity” (Psalm 133:1), there is something particularly heinous about the one who sows discord among brothers.

We know that those who “cause divisions” haven’t come to that place overnight. There might be years of history and struggle in their own life that has caused them to then turn on their friends. So, it’s helpful to consider those seeds that get planted in our own lives and prayerfully consider if these might one day bear dividing fruit. Three I can think of: pride, selfishness and gossip.

Solomon writes frequently about pride because the true and ugly reality is that pride is never far from the door of our hearts. Jerry Bridges calls pride a “respectable sin”. Not that it is respectable but we’ve made it so. Pride insists that I am better, and therefore deserve better, than others. My opinion deserves to be heard, and if it is not heard, I will make my discontent known. This attitude is divisive.

3 John 9 – I have written something to the church, but Diotrephes, who likes to put himself first, does not acknowledge our authority.

In verse 17 Paul offers the way we can spot those who create division: “contrary to the doctrine that you have been taught”.

Proverbs 13:10 says that “Only by pride comes contention”.

1 Timothy 1:3–4 (ESV) — 3 As I urged you when I was going to Macedonia, remain at Ephesus so that you may charge certain persons not to teach any different doctrine, 4 nor to devote themselves to myths and endless genealogies, which promote speculations rather than the stewardship from God that is by faith.

2 Timothy 2:23 (ESV) — 23 Have nothing to do with foolish, ignorant controversies; you know that they breed quarrels.

The novelties of contentious doctrines originate in the proud swelling of “the fleshly mind” (Col 2:18; 1Ti 6:3-4).

Colossians 2:18 (ESV) — 18 Let no one disqualify you, insisting on asceticism and worship of angels, going on in detail about visions, puffed up without reason by his sensuous mind,

1 Timothy 6:3–4 (ESV) — 3 If anyone teaches a different doctrine and does not agree with the sound words of our Lord Jesus Christ and the teaching that accords with godliness, 4 he is puffed up with conceit and understands nothing. He has an unhealthy craving for controversy and for quarrels about words, which produce envy, dissension, slander, evil suspicions,

We are obsessed with finding a new path or a new secret meaning and we are ready to quarrel with everyone who does not value our ideas as highly as we do … and we are being inundated with contention!

Watch out for contentious doctrines as these often come from a prideful heart.

Selfishness demands that our way of doing things be honoured. Because Paul is speaking to the local church there in Rome we can apply this quite readily: we must realise that things are ultimately done for the benefit of the body, not the individual.

The body is always more important than the individual because:

“We are never isolated and alone, never acting .. in separation from others” – Barrington

It’s been referring to before as “I am because we are”. I like that way of thinking about it. Sulking when things are not done your way only produces division. Rather than insisting that your desires must be honoured, be willing to do things in a way that will guard the unity of the whole because “I am because we are”. The person who does not think about the impact of their actions on others is not living a Christ-like life because Jesus exemplified selflessness perfectly

2 Corinthians 8:9 (ESV) — 9 For you know the grace of our Lord Jesus Christ, that though he was rich, yet for your sake he became poor, so that you by his poverty might become rich.

So in the context of Romans 16, watch out of those people who are selfless when it comes to their doctrine. Does it benefit the whole or just the select few, or even just themselves?

Gossip is a significant destroyer of unity but one of the easiest things to stop. Again, it’s Solomon who speaks into this most vividly when he says:

The “whisperer” goes about muttering unhelpful and destructive things to those whom he thinks will hear him. He will not do this honestly and opening but only to those whose ears he thinks he has. It’s the gossiper who is the divider:

Proverbs 17:9 (ESV) — 9 Whoever covers an offense seeks love, but he who repeats a matter separates close friends.

Are you eager to tell the faults of someone to another, or do you strive to cover those faults? This does not speak of trying to cover your own sins, but of lovingly covering the sins of others. Do you feel compelled to share the failures of others with anyone who will hear you, or are you willing to love them enough to cover their faults? Are you eager to guard the integrity of others, or do you want to see their every fault laid bare for the world to see?

The great news is that the Bible not only points out these problems, but also gives us clear counsel on how to avoid becoming a divider.

First, in verse 17, we are warned to avoid those who are divisive. So the instruction is “watch out for” and then “avoid them”. Paul write to Titus and said

Titus 3:10 (ESV) — 10 As for a person who stirs up division, after warning him once and then twice, have nothing more to do with him,

Second, from passages elsewhere in the Bible, we are told to avoid the things that cause division:

1 Timothy 6:20 (ESV) — 20 O Timothy, guard the deposit entrusted to you. Avoid the irreverent babble and contradictions of what is falsely called “knowledge,”

What that means is to stop gossip in its tracks. here’s three helpful tips: