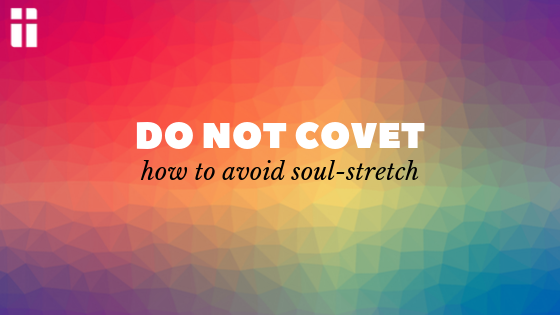 “Do not covet” – for the last 9 Sunday’s we’ve been exploring the 10 commandments – we finish them tomorrow. To get the sermon entitled “The Big Ten: Our Contentment” click on this link.

As we’ve been going through these commandments we’ve been exploring the sin behind the sin: the idea that these things are not only commandments from God to keep – “do not covert” – but they also uncover the motivations and attitudes that lead to that specific sin. I read an article this week where the author stated quite rightly that

So the sin behind the sin is actually the betrayal of relationship – for each commandment a different way to betray, that works it way out in physical tangible sin.

There were two main ideas that we explored around the “do not covert” commandment last Sunday. The first was the idea that:

Converting is essentail a “soul-stretching” for something other than God. We’re dissatisfied people. We can’t find the solution to this soul-stretching until our souls rest in God. The starting point for finding it is accepting that we are so far off and so completely unable on our own to be satisfied.

The second idea comes from Philippians 4 where Paul says “I’ve learned the secret of contentment”. What is the secret then Paul?

I know how to be brought low, and I know how to abound. In any and every circumstance, I have learned the secret of facing plenty and hunger, abundance and need.

This means that if we want to learn soul rest as opposed to soul-stretch we cannot learn it merely by living in luxury (Solomon’s story in Ecclesiastes is a case in point). But neither can you learn it by only living in difficult places. So contentment doesn’t come by accumulating wealth or status – or by giving it all away and living in poverty. Paul says that the way to learn contentment is to discount both as the source of your contentment.

That’s how we avoid covetousness and learn soul-rest – we give ourselves to our loving God with everything. This isn’t to say that we become a little bit more religious or a little bit morally reformed. It’s to say that God becomes the centre of our life.