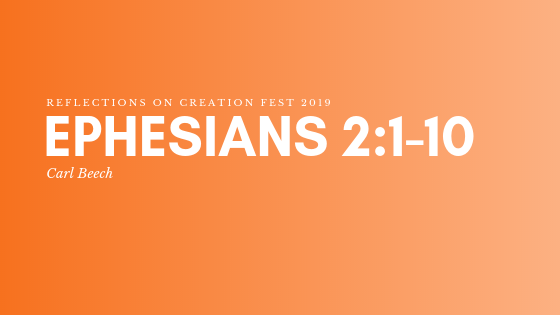 In this post, I will be reflecting on one of this year’s Creation Fest UK messages as well as adding some of my own thoughts. The second message that was given was on the festivals main stage was given by Carl Beech, who is the Senior Pastor of Redeemer King Church in Chesterfield.

Carl is a preacher and evangelist and this is clear when you hear him! Whilst he did not exegete the text per se, when sharing the gospel he is passionate, engaging and relevant, which, as it happens, is at the heart of this passage of Scripture. So, that makes this post quite a challenge as Carl was full of great stories that came alive when he told them. As he didn’t go verse-by-verse through this text I’m going to give you my impression of the text rather than his.

Paul isn’t condemning us here by using the word “were”. He is putting all of the first three verses in the past tense because that is what God has done. He keeps all of our past in the past. The use of “were”, “once”, “walked”, “followed” are all in the past and are significant ways in which the gospel has changed believers.

What is the purpose of saying all of this given the fact that he has already laid out the blessings that we have in Christ, in chapter 1? I think the answer to that starts in verse 8 with the emphasis on “grace” not “works” and continues through the chapter with the idea that the calling of the church was God’s idea hidden in the Old Testament but now revealed in Christ.

Notice two important words in the first verse – “dead in. Note that it’s “dead in”, not dead “because of”. The difference is that “because of” implies that our works have made us dead and that we were originally good or born good. Paul is not saying this. Paul is saying that we WERE “dead in” which means that we were already dead, and had no ability to do anything else other than walk the kind of life that was in separation from God. That’s what “trespasses” and “sins” means. Trespasses here refers to “wilful acts’ and “sin” here means “natural acts”. So, we were born dead by virtue of our natural acts and we compounded this through our wilful acts. All in all in a positive outlook!

2 in which you once walked, following the course of this world, following the prince of the power of the air, the spirit that is now at work in the sons of disobedience— 3 among whom we all once lived in the passions of our flesh, carrying out the desires of the body and the mind, and were by nature children of wrath, like the rest of mankind.

So where Paul says that we “walked” he means that there was a way of life, a habitual, progressive, way of living that the opposite of the way to walk with Jesus. We followed a power that was usually found in the “sons of disobedience” – probably a reference to the fallen angels. The same power that was alive in them, was influencing us.

All in all, Paul paints a very sobering picture of our past. But then verse 4 comes shining through …

4 But God, being rich in mercy, because of the great love with which he loved us, 5 even when we were dead in our trespasses, made us alive together with Christ—by grace you have been saved— 6 and raised us up with him and seated us with him in the heavenly places in Christ Jesus, 7 so that in the coming ages he might show the immeasurable riches of his grace in kindness toward us in Christ Jesus. 8 For by grace you have been saved through faith. And this is not your own doing; it is the gift of God, 9 not a result of works, so that no one may boast. 10 For we are his workmanship, created in Christ Jesus for good works, which God prepared beforehand, that we should walk in them.

Let’s deal with some of the details of this wonderful text:

First, note that it is God who is rich in mercy. The idea of being rich in the Bible is “having something in abundance”. It’s an overflow. An excess. That’s how merciful God is!

Secondly, note that He has taken the “dead in” and “made us alive”. This phrase is proceeding with the idea of “even when”. So here there is no room for anyone to claim that God has made them alive based on their own performance.

Fourthly note that this “being made alive” is by grace. This is God’s unmerited, undeserved favour.

Fifthly note that salvation isn’t the goal, but habituation is the goal. His is what he says in verse 6 in the term “raised us up with him and seated us with him”. This is His goal for us: to dwell with God! Salvation isn’t enough … adoption is the great goal for our lives!

Sixthly note that the reason we are saved by grace is so that God’s love will be a marvel and spectacle to the “powers” and “sons of disobedience” found earlier in the chapter.

Seventhly, Paul sums up in verse 8 what has already been said in the previous verses – that God does the work and it is apprehended by us, by faith. Now, in another post, I’m going to deal with the question “Where does my faith come from?”