Neither Arminian nor Calvinist 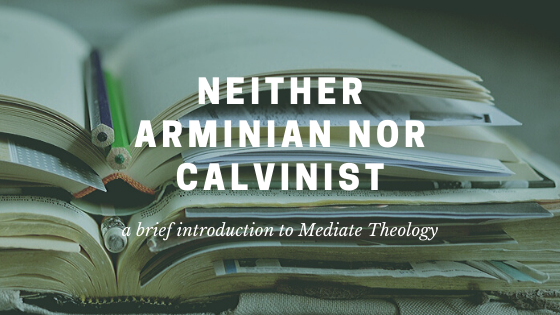 In trying to explain where Calvary Chapel lays between Calvinism and Arminianism, most churches have including a statement in their statement of beliefs that reads something like this:

“At Calvary Chapel, we believe that we maintain the middle ground between Arminian and Calvinist theology”

Although this helps somewhat, it doesn’t go into enough detail. So, in 2011 Chuck Smith wrote a short book called “Calvinism, Arminianism And The Word of God. In it, he attempted to clarify what Calvary Chapel believes and teaches. Again, so much has been written on both sides of the argument that one man could never answer the question.

There is no question in my mind that Calvary Chapel not only pioneered a “middle ground”, but that the movement also added greatly to the present conversation. As we are currently going through the book of Romans I thought I’d quickly revisit what this “Middle Ground” theology expresses – by the way, there are lots of people that call themselves “Calminianism” which I’m not sure I like. I prefer “Mediate” theology.

Simply put, Mediate Theology agrees with classic Arminianism that when God predestines that this is based on his foreknowledge of what all humans would do in all possible situations that they could find themselves in. But it also teaches that God’s all-knowing character is so great that it is not limited just to what all actually created being would do but to what all possibly created beings would do in all possible situations. Because God creates only a finite number of persons between the beginning of the universe and Christ’s return, his sovereign choice is preserved, because he must choose to create some beings and not others. Thus, with classic Calvinism, his sovereign, elective freedom is preserved.

There are countless passages throughout Scripture that, seemingly paradoxically, affirm at one and the same time God’s sovereignty and human freedom (with accountability). Philippians 2:12-13 for example:

12 Therefore, my beloved, fas you have always obeyed, so now, not only as in my presence but much more in my absence, work out your own salvation with fear and trembling, 13 for it is God who works in you, both to will and to work for his good pleasure.

Paul here commands us to work out our salvation in fear and trembling, but only because God is the one at work in us to do his good pleasure.

Woe to Assyria, ethe rod of my anger;

the staff in their hands is my fury!

6 Against a fgodless nation I send him,

and against the people of my wrath I command him,

to take gspoil and seize plunder,

and to htread them down like the mire of the streets.

7 But he idoes not so intend,

and his heart does not so think;

but it is in his heart to destroy,

and to cut off nations not a few;

j“Are not my commanders all kings?

10 As my hand has reached to rthe kingdoms of the idols,

whose carved images were greater than those of Jerusalem and Samaria,

11 shall I not do to Jerusalem and sher idols

tas I have done to Samaria and her images?”

12 uWhen the Lord has finished all his work on Mount Zion and on Jerusalem, vhe1 will punish the speech2 of the arrogant heart of the king of Assyria and the boastful look in his eyes. 13 wFor he says:

“By the strength of my hand I have done it,

and by my wisdom, for I have understanding;

I remove the boundaries of peoples,

and plunder their treasures;

like a bull I bring down those who sit on thrones.

Here we find God using Assyria as an instrument to punishment faithless Israel but then promising to turn around and punish Assyria because of her evil motives in conquering God’s people.

There are 12 basic propositions to Mediate Theology:

For those who like things laid out neatly so that they can compare the three views (Calvinism, Mediate, Arminianism) here is a very useful table called 3 Views on Sovereignty

One of the big dangers for a church like ours, with a good mix of people who believe one of the above perspectives is that:

1) we create caricatures of what the other side believes. Straw men are always the easiest to knockdown.

b) fail to appreciate that both sides are attempting to be faithful – the Calvinist wants to preserve the Scriptural emphasis on divine sovereignty; the Arminian, on human freedom and responsibility. Both are right in what they want and correct to observe in Scripture the theme that they stress.

So, here I lay out the system of belief that I’m most comfortable with. I’m Reformed in as much as I’m not catholic (but agree with neither the Calvinist TULIP nor the Arminians FACTS)

For more reading about Mediate Theology, I’d recommend the book “Beyond Calvinism and Arminianism: An inductive mediate Theology of Salvation” and although quite dry provides some excellent insights.

6 Comments On “Neither Arminian nor Calvinist”