Worthy of the gospel of Christ 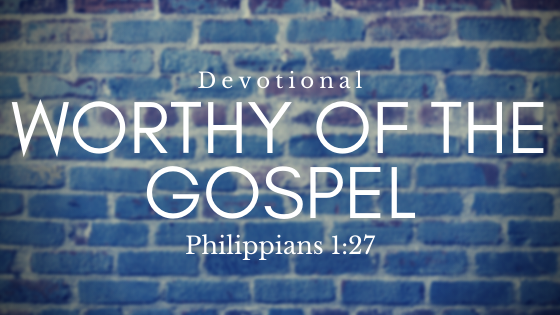 Philippians 1:27 – “let your manner of life be worthy of the gospel of Christ,”

Every day you are making a statement. Whether you know it or not, whether you like it or not, you are speaking. Whether it’s in the way we dress, in our facial expressions, in the words that we use, we are saying something about what we believe to be true.

The Greek word that Paul uses for “manner” means “politics”. Now don’t run to the hills because of that! It simply means that if you are an MP you have a duty to behave in a certain manner. When that duty is not performed, quite understandably, there are questions that need to be asked.

To fully understand what Paul is referring to it’s helpful to remember that the city of Philippi was given to the 28th Roman Legion. They were the ones allowed to retire in Philippi, then it around 30BC the city was given the highest privilege any city could be given at that time – ius italicum. It was a city that was to be governed by Roman Law with the citizens of Philippi becoming Roman citizens. Everything from the legal system, to the way the roads were made, was a copy of Rome. Philippi was called by Rome to be Rome outside of Rome.

Paul is urging the church in Philippi to be that to heaven. Called by heaven to be heaven outside of heaven.

And the people, to have one duty: let your life be worthy of the gospel of Christ,

Worthy means “equal”.  In the same way that two scales are “worthy”, we are to live our lives in demonstration of the truth and power of the gospel