Remembering the Holocaust – 75 years on 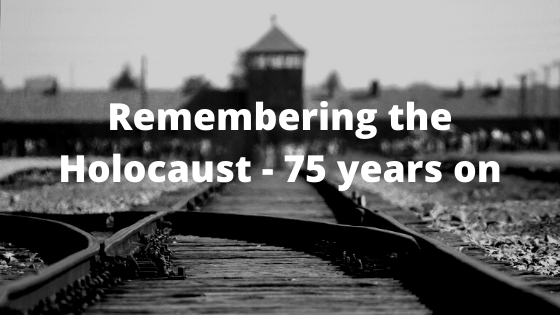 I’ve met a Holocaust Survivor on a number of occasions. His name was Walter Kammerling. Originally from Austria, he was 14 when the Nazi’s invaded Austria and on 9-10 Novemeber 1938 he saw the “Kristallnacht pogrom” (or Night of Broken Glass) which was a pogram (violent riot aimed at the massacre or persecution of an ethnic or religious group) against Jews carried out by paramilitary forces throughout Nazi Germany. Jewish synagogues, shops, businesses and homes were targetted, attacked and destroyed across Germany and Austria. In Vienna, hundreds of Jewish men were arrested and sent to Dachau concentration camp. Walter’s father, mother and older sister ended up in Auschwitz-Birkenau and were murdered in a gas chamber.

This week marked the 75th anniversary of the liberation of Auschwitz-Birkenau. To be honest, it hasn’t had a lot of press … nowhere near enough.

According to the Gospel Coalition, there are 9 things you should know the most horrific genocidal campaigns in history:

1. The term “Holocaust,” originally from the Greek word “holokauston” which means “sacrifice by fire,” refers to the Nazi’s persecution and planned slaughter of the Jewish people. The biblical word Shoah, meaning “calamity”, became the standard Hebrew term for the Holocaust as early as the 1940s, especially in Europe and Israel. The term “holocaust” became a household word in America when in 1978 NBC television aired the miniseries titled Holocaust.

2. The Holocaust began in January 1933 when Hitler came to power and technically ended on May 8, 1945 (VE Day). But the official genocidal plan was developed at the Wannsee Conference on January 20, 1942. Fifteen Nazi leaders, which included a number of state secretaries, senior officials, party leaders, SS officers, and other leaders of government departments, held the meeting to discuss plans for a “final solution to the Jewish question in Europe.” (The Nazis used the euphemistic phrases “Final Solution to the Jewish Question” and “Final Solution” to refer to the genocide of the Jews.) In the course of the meeting, Nazi official Reinhard Heydrich outlined how European Jews would be rounded up and sent to extermination camps.

4. Genocide at extermination camps was initially carried out in the form of mass shootings. However, the shootings proved to be too psychologically damaging to those being asked to pull the triggers. The Nazis next tried mass killing by blowing victims up with explosives, but that also was found unsuitable. The Nazis settled on gassing their victims (usually with carbon monoxide or a cyanide-based pesticide). Stationary gas chambers could kill 2,000 people at once. Once in the chambers, about one-third of the victims died immediately, though death could take up to 20 minutes.

5. The use of camps equipped with gas chambers for the purpose of systematic mass extermination of peoples was a unique feature of the Holocaust and unprecedented in history. Never before had there existed places with the express purpose of killing people en masse. These were extermination camps established at Auschwitz, Belzec, Chełmno, Jasenovac, Majdanek, Maly Trostenets, Sobibor, and Treblinka. For political and logistical reasons, the most infamous extermination camps were in Occupied Poland, since Poland had the greatest number of Jews living in Europe.

6. At various concentration and extermination camps, the Nazis conducted medical experiments on their prisoners, which included placing subjects in pressure chambers, testing drugs on them, freezing them, attempting to change eye color by injecting chemicals into children’s eyes, and various amputations and other surgeries that were often conducted without anesthesia. The most notorious of these Nazi physicians was Dr. Josef Mengele, who worked in Auschwitz. According to one witness, Mengele sewed together a set of twins named Guido and Ina, who were about 4 years old, from the back in an attempt to create Siamese twins. Their parents were able to get some morphine and kill them to end their suffering.

7. Churches throughout Europe were mostly silent while Jews were persecuted, deported, and murdered by the Nazis. As Holocaust scholar Victoria J. Barnett says, “In Nazi Germany in September 1935, there were a few Christians in the Protestant Confessing Church who demanded that their Church take a public stand in defense of the Jews. Their efforts, however, were overruled by Church leaders who wanted to avoid any conflict with the Nazi regime.”

8. The largest Protestant church in Germany in the 1930s was the German Evangelical Church, comprised of 28 regional churches or Landeskirchen that included the three major theological traditions that had emerged from the Reformation: Lutheran, Reformed, and United. Most of Germany’s 40 million Protestants were members of this church, although there were smaller so-called “free” Protestant churches, such as Methodist and Baptist churches. Historically the German Evangelical Church viewed itself as one of the pillars of German culture and society, with a theologically grounded tradition of loyalty to the state. During the 1920s, a movement emerged within the German Evangelical Church called the Deutsche Christen, or “German Christians.” The “German Christians” embraced many of the nationalistic and racial aspects of Nazi ideology. Once the Nazis came to power, this group sought the creation of a national “Reich Church” and supported a “nazified” version of Christianity. The Bekennende Kirche—the “Confessing Church”—emerged in opposition to the “German Christians.” Its founding document, the Barmen Confession of Faith, declared that the church’s allegiance was to God and scripture, not a worldly Führer.

9. The most commonly cited figure for the total number of Jews killed is six million — around 78 percent of the 7.3 million Jews in occupied Europe at the time. Additionally, the Nazis murdered approximately two to three million Soviet POWs, two million ethnic Poles, up to 1,500,000 Romani, 200,000 handicapped, political and religious dissenters, 15,000 homosexuals, and 5,000 Jehovah’s Witnesses, bringing the total genocide toll to around 11 million.